My friend's two-year-old had a really scary-looking doll with big blue eyes. At some point, she decided the doll was a boy so she took off its dress and called it Michael. I never wanted to hold it. It would stare at me with its unblinking eyes and its painted-on, sinister smile. I told my friend it reminded me of Children of the Corn. 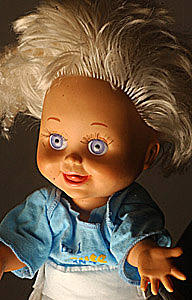 I'm with you on all that stuff. I especially hate any toys that talk to you. I also hate clowns, mimes, mannaquins, dolls that are supposed to look realistic.


Yep, hate those too.

There is something inherently creepy about dolls. I'm with you all the way. My neices have a few and seem to love them at first, but they always end up destroying them...losing their heads, cutting their hair off, blacking their eyes out with sharpie pens, gutting them like fish...I don't know which is worse. The before or the after.

You don't know what EZ Mac is? Granted, it's a recent invention, but c'mon! It's so fuggin' convenient! College students have been known to subsist on nothing but EZ Mac and Ramen Noodles at something like $.92 a week. It's amazing.

Sorry about the cold. I'd kiss it better, but I think that might be how you got it in the first place. :P

what do you mean scary? her hair falls just like yours does! lol
and i am not shitting you here: word ver: sgsnm (damn thats earie!!)

Okay, I can see your point about the dolls. I had a porcelain doll with REAL HUMAN HAIR as a kid. My mom wanted me to put her into a cupboard and never touch her, but she was SO DAMN FREAKY I had to cut that hair off and tie a bandana around her freaky, blinking eyes.

But how could you think this isn't ADORABLE?

I don't know why, but all of a sudden I'm craving an Armour hot dog...what kind of dolls like Armour Hot Dogs anyway?

You said "tits" and "shit" in the same post!

That is kinda cool for some reason.

BTW- Stevie King got the idea for Children of the Corn while driving across Nebraska.

This one's all me. Terisa will try to distance her self from this blog but try as she may I'll just keep reeling her back in. said...

My grandma used to knit us dolls for christmass....those were always really scary Christmas's.

that doll totally creeps me out! i saw the evil in its eyes...kinda like it was actually saying "i'm going to kill you jamwall....."

The doll in your post IS a little freaky.
I don't mind dolls so much, but the ones I got as a little girl already went through three older sisters so they came to me with no hair (just holes in the heads), squished eyes, usually stuck open, and crayon or ink marks all over them.

*sniff* u are racist against dolls.

how sad. when will the world realize, its not the color of the plastic skin, but the internal hollowness that counts?

this post is going to give me nightmares. Thanks.

When Spinning Girl told me about this entry, I just had to add on a few of my own...

2 - Dolls that you order from those Sunday magazines that accompany many local newspapers (my friends mother used to collect them and the scariest by far was a baby in a crawling position that was put on their mantle - where was it trying to crawl to?!)

3 - A favorite of my mothers childhood - Little Miss No Name. The name alone should tell you how scary this thing is... Click at your own risk (I'm warning you now): http://www.whitless.com/wpe09298.JPG

One more that I wanted to share that I forgot about - I almost succeeded in blocking it from my memory.

4 - The Raggedy Ann Doll. As if it wasn't scary enough with that devil red hair, triangle nose, and ugly striped stockings... Ed and Lorainne Warren are two individuals who research the paranormal. One case was on a doll owned by two nurses. Her name was Annabel, but she was a Raggedy Ann doll that was possessed by an evil demon. The story can be read here (once again, I warn you - this story should not be read by those with heart conditions)

Really, I embrace all cultures; I just hate "white-dolls-turned- ethnic" by adding color and changing the face a little bit.

What about Raggedy Ann? After the Warren's told the world about the Raggedy Ann that they keep behind glass because it tried to kill people. My mother has my old RA and I can't bear to look at her. Oh, and she talks with a pull string. Yikes!

Help me find some dolls I can turn into Marizpan Babies.

That is a seriously freaky doll. I can't believe it took a full year to get "spirited away."

I think American Girl borders on cult status as well. Once you get in, you never get out.

"anatomically correct female dolls (with delicate little folds of plastic labia)" hahaha! Iced tea came out from my nose when I read that!

My little sister had this scary blue-eyed blonde androgenous doll that said things like "tell me a secret, I'll tell you one." I swear to this day that doll said "Want to play? I'll fuck you." Everything else it said was easy to understand, but the "fuck you" was a little blurred on purpose. I had to gut it until I got the little voice box out for my family's safety!

I colored on it with a permanent magic marker and cut all it's hair off first, but that was more for me I guess.

I totally agree! That doll your 2 year old has is a Galoob Baby Face doll made in the 1990s. They stopped making them but would you believe that there is a group of people who collect the whole series. They even costume them and hold online fashion shows for the creepy little things. These collectors like to "talk" online in lisping baby talk as they discuss their "babies". Ick! These plastic dolls so creep me out that I have decided to use a few of them that were donated to me as Halloween makeover dolls. I've jsut about finished 5 of them and I plan on auctioning them off in charity auctions for Unicef in October. Check out the progress in my eBay blog if you wish: http://blogs.ebay.com/dturnersan