Today Monkey came to work with me at Quaintville Middle School! It was the most fun. We decided to ride the train, because Monkey informed me he liked trains, and he would love to ride. He was quite insistent actually. Persistent, even. Like a droning wind that will not stop and rattles your windows through the night. Which reminds me ... was there a disturbance in the night? I don't remember. 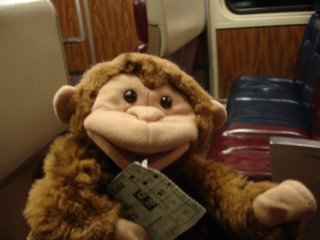 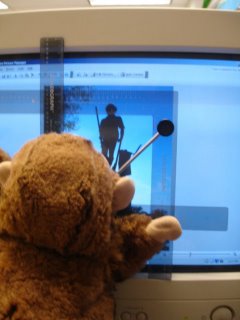 During Yearbook class, Monkey tries to crop digital photos of Boston monuments. He doesn't fully get the concept. 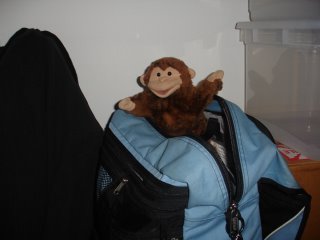 While I was teaching, I couldn't have Monkey in the classroom, because, well...

First of all, puberty does odd things to the human brain, and there is a LOT of puberty in my classroom. I didn't want Monkey to be harmed by any sort of impulses. Also, I would have to explain about him, and about the little things stuck to his fur, and we had important things like Shear Strength and Metal Fatigue to learn about today. So I put him safely in the little nest I made in my school bag, where I presume he stayed safely throughout the day. 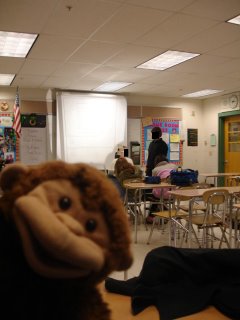 Later, we snuck a photo of Quilting Girl teaching math. 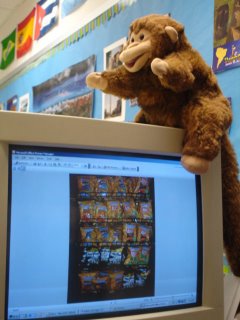 Monkey liked the sounds my computer made as I edited cafeteria photos, and pretended the monitor was a pony. 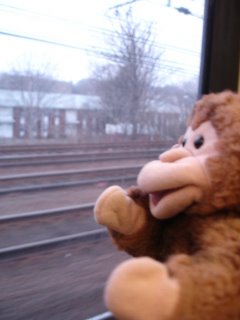 On the way home, he wanted to stop for marshmallows, but I explained to him that it doesn't work that way. He wondered whether they sell marshmallows and/or pies on the platforms, and kept watch for that. He is still hoping and asking.

I hope the banana cream pie I am making isn't too big of a letdown, after that.

I think I'm starting to get a little teeny bit scared now - LMAO - nothing that my meds won't cure, I'm sure. Glad to see you and Monkey are having such a great time!!!!!

I like pretending that my monitor is a pony. ps. girls are gross.

And no I'm not just saying this because you chose monkey over me.

I feel SO priviledged to have had the opportunity to meet Monkey! It was as though I was amongst royalty - I was nervous, my palms were sweaty, and I'm not quite so sure how well I taught stem-and-leaf plots... Monkey even sat in the back making faces at me - it wasn't easy, but well worth it! :)

so really...is your ass as round as you say?

I take my monkey to work with me everyday...

I am glad to hear that the visit is going well. I hope someday that my life will be as exciting as all of this. Alas, it is not. At least i have a lamp and some lightbulbs...

this is a five star resort indeed!

If I may use a word I've always enjoyed but don't get many opportunities to use ...

That's what all this is about - monkeyshines! (You'll need to make a small book about all this and call it ... well, you know.)

I am sooo jealous! I want Monkey to come visit me!

Okay, I would settle for Calzone...

The last time this happened, it all went horribly, horribly wrong and you ended up changing your name and moving to Florida.

Or maybe that was in the other universe. They're all parallel and perpendicular, you know. Not like diameters.

Such a great journal of the big weekend! Hey, didn't know you are a teacher! Junior High??? BRAVE woman! I will stick with the little guys!

very cute. although, i have to say, i bet your middle school students would love to hear about the adventures of monkey!

I hope the fact that monkies have pimples isn't too much of a disappointment.

i would like to take this opportunity to say that i have just been looking at a picture of you, and you are lovely.

Monkey is having the time of his life...I can tell by his expression.

I miss that little fucker.