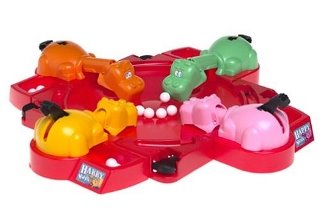 Now here was a game I could understand.

Four hungry quadripeds, in a circle, gobbling marbles at a speed that would induce dyspepsia in most people. Why, it's just like Thanksgiving! 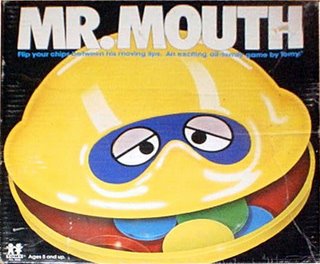 Similar concept, but it's just one hungry guy, and you shoot Necco Wafers into his mouth, as his head spins. I was always frustrated by the lack of control I felt with this one. With the hippos, I knew I just had to be the fastest, biggest pig. Mr Mouth wasn't as predictable. I like the illusion of control.

These were just a few of the games in the 4-spastic-kids-huddled-in-a-circle genre. See also: Cat's Eye. Your 5th friend would always read your Little House books during this time, as there was no room for a spare in this setup.

Next in Nostalgika: The freakiest TV show ever. Hint: Sleestacks!

Mr mouth was my nickname in highschool. And it's not what you're thinking. I just love to give oral sex.

These treasures were a little after my time. We had neat games too though ... back in my day. Like "telephone" ... that's where you stick a paper cup to the end of a string and force your kid sister to do the same on her end then you yell real loud into the cup and pretend you can hear each other through the string. Then you shove your kid sister when she gets tired of playing and you stick her in a closet and ... oops. So sorry. I get so carried away remembering the good old days.

dude! hungry hippos still shares a special place in my heart, and my loft too incedently i think small kids and lots of small balls was a dissasterous move back in those days.

i remember those idiotic ass commericials when i was a kid.

i could do the exact same thing when i was a kid! except, in my case, i was possessed by demons.

Those were my favorite games as a kid, and when I grow up I might get rid of them. I dont know.

I still sing the hungry hungry hippos song whenever my kids are eating their food.

I loved Hungry Hungry hippos! sadly, my sister hated it so I had to play with...er...by myself.

HHH. Good times. All my friends had it but me, so I got to play it every other weekend.

Whenever my co-workers and I get together for lunch, one of us is always starving and ready to eat NOW. The code phrase for that is:


Type that in an email and, trust me, everyone knows what you're talking about.

OMG! I forgot all about Mr. Mouth, I loved that game!

wow that brings back memories...

Also, you're too funny. I didn't READ little house on the prairie (how do you spell that)...I WAS Laura.

No, really, I had this dress with flowers and calico and I thought it was like a covered wagon dress and I wore it three times a week and told people I had to iron my clothes by a creek.

Sweet munchin' hippos! I loved that game! I wanted it so bad, I asked for it 2 years in a row for X-mas and b-day. But noooo, we just had to be poor.

I finally got it later and played it until all the hippos broke. We got all the way down to 1 lonely hippo.

What a sad story.