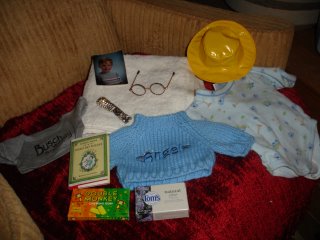 Monkey's belongings
It took Monkey a while to unpack, but when he felt like he had settled down, we began to acquaint ourselves with one another. 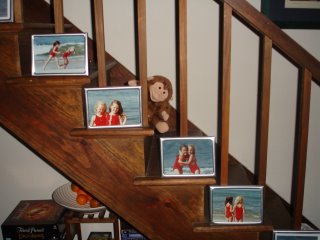 Monkey investigates the Keeping it Simple pictures
We have had the loveliest visit so far! Monkey made up a song for me during his 24 hours in Quarantine. Here it is. It brought tears to my eyes!

Monkey and I decided to make the most of our afternoon despite the rain. We headed out to the Spinning Wheels (my car) for an outing in town. 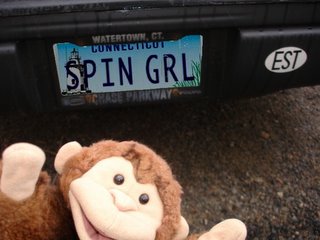 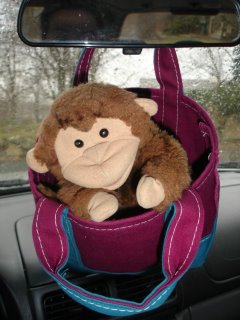 I thought the best vantage point for Monkey would be this bag on the rearview mirror. He filled it with pellets, but he could see out the window and talk to me, which I felt was important.

Since we missed Spa Day due to the mishap with Customs (Monkey was very glad to have missed the Brazilian bikini wax after I explained to him what it was), I decided that a trip to Starbucks and the toy store might be a nice way to start out. 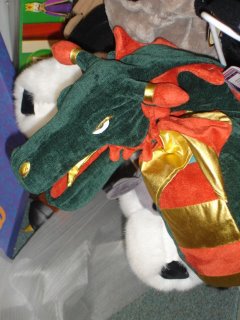 While at the toy store, we saw one of Calzone's pallys. 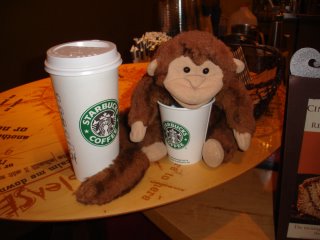 I got a venti vanilla extra hot extra chai chai latte, while Monkey got a tall mochaccino with banana syrup. He dove right into it.

Our last stop was to swing by Mary on the Quicksand, Monkey's favorite shrine. He took his own pictures, which I have not yet seen.

When we got home Monkey started making demands; ever the hostess, I tried to meet his needs. Here he is enjoying some Tension Tamer and cheesecake with me. 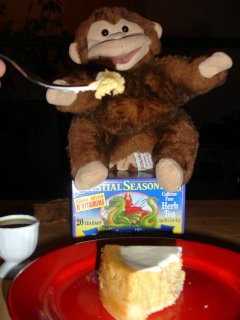 I'm thinking tonight we will play Scrabble, make s'mores, watch a movie, and then go to sleep. Monkey is talking about coming to work with me tomorrow, so we both need a good night's rest!

I'm glad Monkey avoided the Brazilian. That might have scalped him entirely.

I'm so jealous and all that

I am sooooooo jealous - what a most excellent song and to have it dedicated to you no less!!!!!!

OOOH, Monkey must be having fun.... Take good care of him.

Is it pathetic that I want to be a plush doll now?

Who knew Monkey was so demanding? He's a pushy little simian!

This reminds me that I have cheesecake in the fridge. Thanks!

I confess, I'm flummoxed by all this. I keep dropping by wanting to leave a comment but don’t know what to say. I’m not sure whether to applaud and envy you or recommend a therapist.

But it all sounds like a giggly bunch of fun.

(btw ... My cat, Gonzo, says monkeys are not to be trusted. True friendship only comes from a cat and only if you do everything the cat wants. I don't necessarily agree with her but as her claws are in my thorax I'd felt I should pass her comment along.)

One day I will write about Foo (no longer with us), the Apocalypticat.