Since yesterday was to be our last day together, I made special dinner plans and told Monkey not to fill up on snacks while I was at work. He stayed home alone, and appears none the worse, although he did mistakenly attack my s'more-snowman Christmas ornament. They look real, I know! 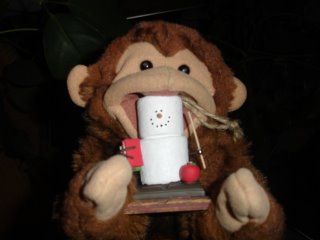 For our special dinner, I got an order of sushi for us to share. I put on some quiet music (Hoobastank) and we enjoyed tea while reflecting on our time together. We were going to play a game, but quality time seemed like a better option. Monkey feels that the high point of the trip, for him, was his time at my school. I don't see how much fun he could have had sitting in my bookbag, but he seems to have enjoyed himself. 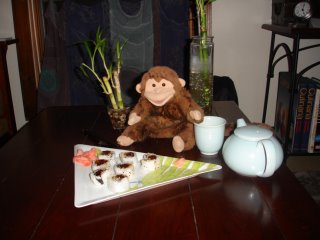 Monkey became quite adept at eating with the chopsticks, and later practiced with his banana slices. For most of the time, I hand-fed him, a new delight of his that he is sure to miss when he returns home. he kept chuckling and petting me between bites. I believe he is rather smitten at this point, and who can blame him? 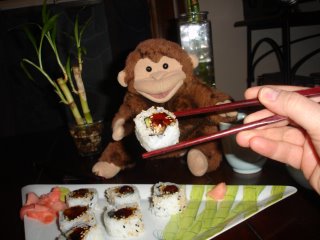 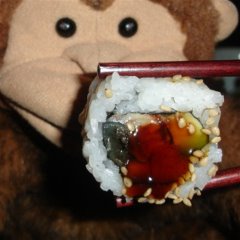 This morning was heartbreaking. We had a long and sorrowful embrace. I've never had a little simian hold on to me quite so tightly! 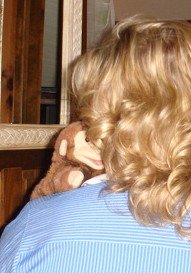 Then I packed Monkey into his rocketship with all of his belongings and a few souvenirs, and wished him well. I sent him on his way in the early morning, and I hope that he has a safe journey home. I will never forget this time, sweet one. I had the time of my life! 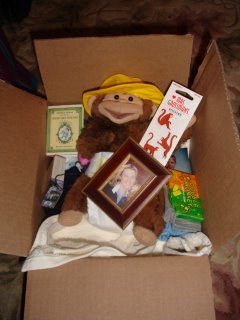 He IS a good laugher after all, isn't he?! Well, I think that's just wonderfee. Glad you had a good time! You deserve it.

*tear* very poignant post, darlin. Thank you for sharing Monkey's holiday with us!

That is SO sad! Just leave off the postage and he will return to sender!

I think you may take this "blog" thing a little too far.

This was heartwarming. Also, I'm not real.

This had to be the sweetest little series. I actually read it everyday to find out what you and Monkey were going to be doing next.

I either need a Monkey, or a life.

It's Product Expo Month over at Roboshrub Inc.

Enjoy! This reminder courtesy of your local Anonymi, Rick.

Awwwww. I miss him already. I think I will go spank my monkey now.

this series was sweet, yet hilarious. sounds like you and monkey had a fantastic time together.

Tell me that's Chicken Soup with Rice by Sendak in there...My favorite kid's book ever.