I’m going to be moving soon, and all the house-hunting angst has reminded me about the childhood fun of playing house.

I have many fond memories of playing in cardboard boxes. When I was a very young child, age 3-4 or so, the box was a small, starter house. Perfect for a first house, a little bit of a fixer-upper. Twirling Girl and I spent hours sitting inside the box, fighting for leg-room, competing for the Most Staticky award. 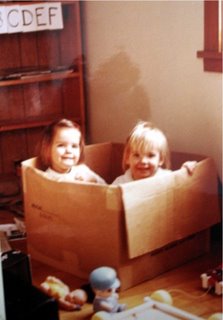 In later years, only the full-size refrigerator box, lying on its side, would serve. It was inside the musty, papery-smelling darkness of the refrigerator box that Jenny and I kissed. The conversation went something like this:

SG: Well, I guess we should kiss.

She puckered up and I kissed her, right on the lips. She had the hugest pucker I had ever seen. Very much unlike the small, pert, northern-European puckers of my family, who were the only people I had kissed up to that point.

The refrigerator-box was such a cool house that my mom helped me cut windows out of the side and made little curtains out of old fabric for it. All that was missing was a window box and a chimney. Even so, it was a bitchin’ house. 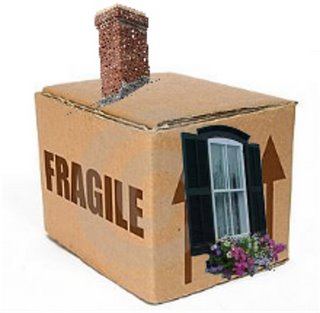 
I don’t remember much about playing in that house; I actually think I got bored in there pretty quickly, and would often come out of it, and play Lincoln Logs on the carpet next to it. But it remained in the basement for a good long time.

Suddenly, one day, it was gone. This was very alarming. Imagine a demolition crew coming and tearing down your property without consulting you. Imagine how powerless you would feel. It was one of the first times that I learned the tough lesson that I would continue to be hit with, over and over in my life: Nothing gold can stay (Robert Frost). Kind of like the time my ten-speed just vanished. True, it was a long-neglected rust-heap, but still. Maybe I wanted to build a shrine for it.

My younger sister, Tuuna Taco, had a plywood shack in the woods that she and Julia used to play in. It had a huge sign above the door that said: JATHITW! NO BOYS ALLOWED!!!! (JATHITW stood for “Julia and Tuuna House in the Woods”. Creative, huh? And by boys, they meant Julia’s younger brother Julian, a bespectacled tornado of aggravation. Sidebar: Julian had a huge crush on me, and whenever these neighbors came to visit, Julian spent 35 minutes in the shower, Zesting up for me, which I repaid by ignoring him completely. Sidebar 2: I sometimes babysat for Julian, and whenever I did, his mom would kiss me goodbye. I found this very uncomfortable, even though she was a family friend and sort of like my aunt. I felt really bad the day she tripped over the dog on the stairs and broke a bunch of her teeth in her fall. But I digress!).

I never once set foot in the JATHITW. It had some serious spiderwebs in the corners, the thick kind that look like cotton balls, with a moving, black, 8-legged mass inside. Also, earwigs were abundant. Furthermore, I was in middle school by this time and way too cool in my knickers and bangle bracelets to be playing HOUSE with Julia and Tuuna.

The one thing that was missing from all my play-houses was the homemade smoke-oven. To make one, you take a 50-gallon drum and attach a smoke pipe to it, with another drum lower down in which you build the fire. By the time the smoke gets to the bigger drum, it has cooled somewhat, so you don’t cook the shit out of your eel. Only the best Estonian families have their very own smoke-oven. The neighbors in the McMansion really seem to love meat-smoking day, and demonstrate their gratitude by playing their bagpipe in the yard for two hours. True story. But I digress again! 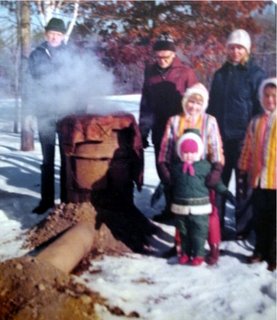 Here we all are, smoking some meat. Notice the death-grip that I have on my younger sister. She can't even move her little arms. I was always holding on to my sisters, quite forcefully in fact.

Other houses got built from time to time. Some, out of couch cushions or mattresses in the basement. These were perfectly adequate, but never as alluring as the cardboard box. Outside, the elaborate plans for the igloo with an intricate system of snow-tunnels were quickly abandoned when we discovered how sweaty we got and how much work it was just digging one shallow hole in the snow.

Nowadays, I play house for real and it’s never quite as fun as the childhood houses were. Maybe it’s because I have so much stuff. Moving it all from place to place is too much work. It would be better to just throw my books, a few cool-looking rocks, and a mirror into that old purse with the cool pearly clasp that my grandmother gave me, and move into the new place. Life used to be so easy.


p.s. I still can’t get over BabyJewels’ story about the homeless guy who moved into the Little Tykes house.

Why are you moving??

Loved the old pics. Cute bum at the beach!

So where are you moving and why?

life DID used to be so easy.

why must things change?

i usually just take the couch cusions and build a soft fort and suddenly its 1976 again.