Five Star Resort VI: No Rest for the Weary

Monkey and I really partied last night! After our s'mores, we took a shower and got into our jammies. Then while I was setting up the Scrabble, Monkey got into the Red Bull and drank about 5 cans of it before I could stop him. This made for an enthusiastic Scrabble game, but not as conducive to sleeping! I dropped off quite quickly, but I don't know how long he was up. He woke me up in the night, something about marshmallows, and burglars, and dragons. From the looks of his groggy self, he didn't get many winks. We are off to catch the train for Bring Your Monkey to Work Day. More news later! 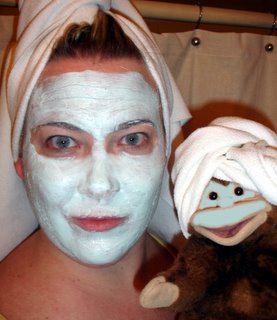 After our shower, Monkey and I did a cleansing mud mask.

It invigorates and energizes the pores! 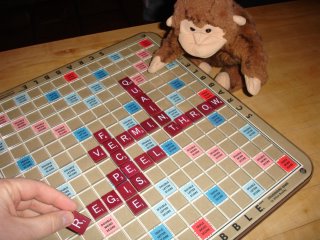 because we hadn't agreed that proper names are OK.

I adamantly believed that they are,

but now that I've been bitten over it, I concede. 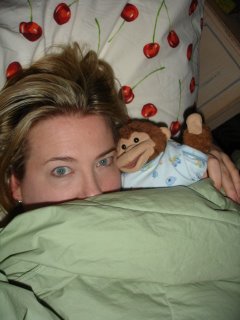 Monkey and I settled into the Spinning Bed,

and tried to decide which armpit would be best.

We settled on the left one, initially at least. 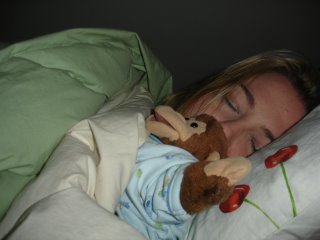 I fell asleep right away, but Monkey was up for hours.

He sings when he is bored, I might add. Loudly.

I love your eyes.

But still just not right, in a way.
I mean the whole Monkey thing. Not your eyes. 'Cause they are nifty.

On second thought (after a certain email was read) I think this is not-not-right!

(which means it is right. I guess I could've said that instead of "not-not right", but that sounded "more gooder", which means "better", but "more gooder" sounded "not-unfunny" which of course means....fuck it)

I came outta retirement to say....Hi!
I think I spelled "retirement" wrong, but I am too nice to care!

This is exactly what the Manwich of Destiny foresaw eons ago.

I am enjoying "Bring Your Monkey To Work Day". I'm borrowing a computer in the computer lab, and I plan on filling everyone in on the details of my visit later. I must say though... Spinning Girl drives most erratically and she sleeps very soundly too.

Other than that I'm having a lovely time. The face mask took care of a pesky blemish I've had just under my left nostril. And her armpits are heaven.

I've found that I vastly prefer showers to baths also.

I may not go home.

Are those Cherry Sheets from The Company Store?

SG, You are just too much!

did you have trouble getting that stuff off of the monkey? I hate having to wash my kids stuffed animals when they barf on them and stuff.

ah, the magic of photoshop!

hahahahaha....Spingirl I LOVE the Monkey in his towel and you in....um...what is that on your face, icing?

Too funny! ... Especially, "Wake up woman!" How many times have I said that?

But I still think therapy may be in order.

you are so happy together.

You two were SO meant to be.

Oh, looks like you two are having a perfect time! :)

That video/clippet was so funny it got me crying.
At work I might add.
Good show, jolly good show.

if you ever get married, things are going to get ugly with that monkey. primates are very territorial about their females.

Love the blog. The two of you look like soul mates : )